During character creation, newmans must choose a gender, male or female, and can begin as any of the four starting classes, hunter, ranger, force, or braver. Newmans have high T-ATK overall, but low HP and DEX, compared to other races. Additionally, newman males have high R-DEF, and newman females have high T-DEF. Initial level 1 statistics for newmans are as follows: 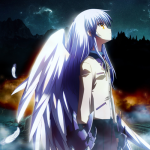